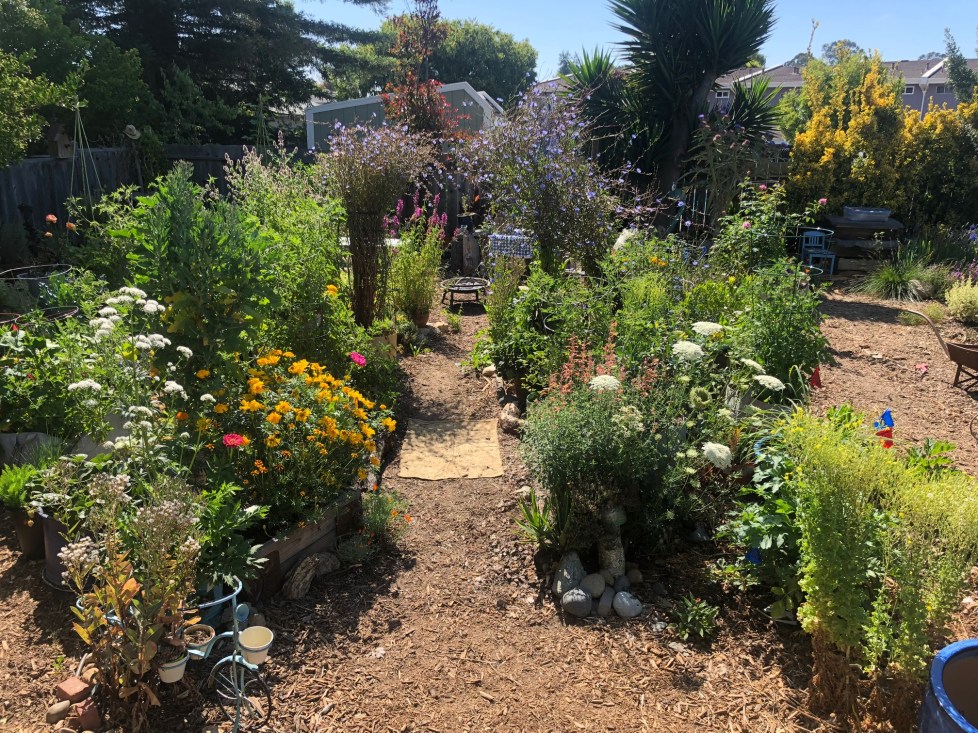 Climate change is predicted to threaten the health of our ecosystems with droughts and storms, food shortages, shifting habitats and extinctions. Here are some tips for making your garden and your native ecosystem more resilient:

Drought will be one of the main concerns for the area, endangering many sensitive species, according to the Central Coast region report of California’s fourth climate assessment.

Ken Foster with the harvest at a rooftop garden.

“With drought, it’s certainly about choosing the right plants,” said Foster. “And there’s plenty of California natives that evolved with a drought cycle, there’s plenty of plants that are colorful, that attract pollinators, that are low maintenance perennials that have deep roots and therefore use less water. Native plants are uniquely adapted to their environment and provide food and habitat for insects, birds and other animals.

Foster also said mulching over bare soil, removing water-intensive lawns and installing drip irrigation systems with smart timers can all help conserve water. Greywater and rainwater catchment systems can also make use of water that would otherwise go down the drain.

Extreme rain events will also threaten the area, causing erosion and damaging freshwater and ocean ecosystems with sediment and pollutants.

Foster said that biodegradable jute netting and groundcovers can be used to retain soil on bare slopes, and rainwater that isn’t caught in tanks should be diverted into bioswales – level ditches that allow water to sink into the soil and recharge the groundwater.

“Instead of running it off into the gutter where it’s collecting pollution and polluting the bay, we’re trying wherever possible to sink rainwater, either by capturing it in a tank or sinking that water into the ground using bioswales,” he said.

Foster also advocated for more permeable hardscape — paths, patios and driveways that prevent excessive runoff and allow water to percolate through into the soil.

Linda Brodman, president of the Santa Cruz chapter of the California Native Plant Society, said that native plants are uniquely adapted to their environment and provide food and habitat for insects, birds and other animals, supporting them and allowing them to move through the built environment.

“It’s good to plant what has evolved locally in these particular soils and in these habitats because they’ve developed over a long time, they’ve coevolved with what’s here,” said Brodman. “It’s a foundation for restoring and developing your garden. You’ll attract birds – good grief, in my garden I found a salamander recently.”

Hall said that planting locally sourced native plants can increase genetic diversity, not just of species but of individual populations, and particularly if they’re planted in patches and stands to attract bees to cross-pollinate them.

Planting rare, endemic and endangered plants, or the plants that rare animals need for food and habitat can also help preserve the biodiversity of the region.

Michael Loik, UC Santa Cruz professor of environmental studies and an author of the Central Coast region report, said climate change will eventually cause significant shifts in habitat ranges that will threaten many species, especially those with small populations.

“The central coast is a hotspot of biodiversity, and that means that there are a lot of species for which climate change could be imperiling,” he said.

According to the report, changing patterns of rainfall and temperature will in general cause plant species and the animals that depend on them to move up into the mountains and north through the lowlands as temperatures increase, requiring conservation not only of existing habitat but anticipation of future habitats and corridors for species to get there.

“You can make your yard more pollinator and bird friendly with some simple changes,” said Chris Lay, lecturer and manager of the UC Santa Cruz Natural History Museum.

“By providing them with good pollinating plants and habitat for nesting, a little bit of a water source, diversity of species, shelter, perches, that sort of thing, we can make the habitat that’s here more attractive and suited to their needs, and help them survive and cope with these changes better,” he said.

Ask for pollinator- and bird-friendly plants at your local nursery and think about how to design your garden to support wildlife with food, water, shelter and movement.

For example, Barry Sinervo, a UC Santa Cruz professor of ecology and evolutionary biology, said he transformed his yard into a rock garden, making a haven for the lizard species he studies.

“If you plant rock gardens, you enhance the ability of many of these species to take hold in the urban landscape,” he said.

Sinervo said that some of the species he studies have already gone locally extinct or are endangered due to climate change, but that providing “refugia” can help them persist and adapt.

Monarch butterflies are beloved visitors of the Monterey Bay that overwinter in eucalyptus groves, but their populations have declined severely due to habitat loss. Based on the latest Western Monarch Thanksgiving Count, the population in California is anticipated to be less than 30,000, an 86 percent decline from last year and a precipitous drop from historic estimates numbering in the millions.

Planting native milkweed, the only plant that monarchs lay their eggs on and that their caterpillars can eat, as well as flowering plants that produce nectar for the adults, can provide much-needed habitat that could help revive the species.